on August 14, 2013
The wildlife of the BGS Keyworth site is regularly observed and recorded. Most sections of wildlife that is, apart from one family of creatures. In 2009 as part of National Moth Night, Gemma Purser organised a moth trapping event at the BGS. The results from this fed into the national statistics and since then Steve Thorpe and Gemma, who are both part of the BGS Biodiversity Action Group, decided to make a concerted effort at finding and recording the moths of Keyworth. Last year they began organising moth trapping events which allowed members of staff and outside visitors the chance to see these interesting, sometimes beautiful, mostly intriguing beasts. On Thursday they embarked on the 1st Trap of 2013. Here they give an outline of their findings so far, and provide an insight into the night-time activities of this fascinating subject.

Last week we started our 2013 moth night campaign. And what a night to choose! It was in the middle of a blistering heatwave, it was calm, dry and slightly cloudy. Perfect conditions meaning the moths were out in force. We also had a good number of audience participants to help catch the moths as they flew around us.
The traps were lit around 930pm, with the first moths being spotted only a few minutes later. Moths fall into two categories called Macros and Micros. As you would expect the micros are much smaller than the macros, and as such they have traditionally tended to be under-recorded. The first moths to arrive are usually the micro moths. On this night they included species such as the Grass Veneers and Scopariids. Before too long we had collected some larger specimens including Small Fan-footed Wave and Orange Swift. 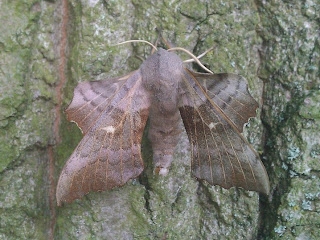 As the night wore on and darkness spread the moths came thick and fast, along with lots of other bugs and insects such as ladybirds, midges, caddisflies, craneflies and shieldbugs. Our little team of trappers stayed onsite until around 11pm and by that time we had potted up around 60 moths ready for the morning to be identified. The larger macros also tend to be much more ‘cuddly’ with big feathery antennae. A good example of this is this Poplar Hawk Moth (left), of which we caught 4. The wings are folded in such a way that they hide a bright maroon coloured patch on the hindwing which is flashed when the moth is disturbed.

We ran three different traps and had very different results from each one, including different species found in certain traps that weren’t in others. Two of the traps (the 125W Mercury and the 80W Mercury Blended) were located in the wildlife garden, and the 15W Actinic trap was located by the wind turbine near to the footpath across the back of the site.

So you can see that different lights and traps attract different species, and generally speaking the rule is that the brighter the light the more moths. However, the suspicion is that because the 80W trap was the first trap we emptied then a little bit more conscientiousness was applied. It’s hard to concentrate on EVERY moth when they’re all flying around your face as you’re trying to count them!

If anyone has an interest in moths, or anything else natural, then please feel free to get in touch with Gemma or Steve.

The Biodiversity Action Group has lots of plans for the Keyworth site such as renovating the pond and wildlife garden area, introducing new bat and bird boxes and creating a ‘wildlife walk’ along the lines of the Geological Walk, to guide staff and visitors to the key hotspots for wildlife on site. If anyone has any other ideas and would like to get involved then please get in touch with either Steve or Gemma.