The global biogeochemical cycling of silicon (Si) is a hot topic.

By this (cycling) I mean the transfer of biogenic silica (silica deposited in plants, algae and animals) through Earth processes. Understanding how this cycle works, especially how it results in the eventual storage of silicon (and atmospheric CO2) on the sea bed, allows us to better forecast the future global effects of rising atmospheric CO2 levels and estimate how well the Earth is able to self-mitigate these changes. 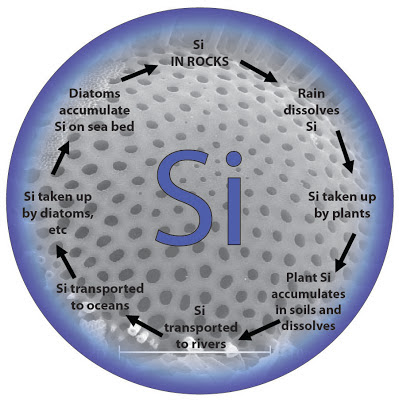 Lets take a look at the process in detail-


To understand the global silicon cycle we need to undertake many individual local scale studies to understand each step in the cycle. For example, over geological time the amount of silicon in the oceans gets replenished by the weathering of rocks, so it is important to understand how much climate change affects this weathering, particularly when levels of atmospheric CO2 are high, and how ultimately this may lead to greater storage of CO2 in the diatom skeletons on the sea bed.

To this end a working group was set up in the UK a few years ago, the Isotopes in Biogenic Silica (IBiS) group tackles ecosystem-scale experiments from catchments, through rivers to the oceans. Recently a volume of papers was published which looks at  weathering, transport, and deposition of silicon. Understanding the silicon biogeochemical cycle, and especially its association with the global carbon cycle helps us better forecast the world as a result of rising atmospheric CO2 levels and how well the Earth is able to self-mitigate these changes. 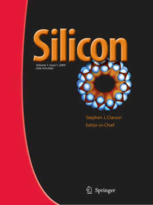 The IBiS group in the UK is convened by myself along with Prof Philip Barker  (University of Lancaster) and Prof Alayne Street-Perrott (University of Swansea). The latest IBiS volume – a collection of papers – on silicon cycling was recently published in the journal SILICON (The Biogeochemical Silica Cycle from Land to Ocean, volume 5, issue 1, January 2013 -link).