on September 11, 2012
A team went out last week to rescue some fish from the pavements of Edinburgh! Instead of RSPCA officers this was a team of 'rescue paleontologists' for the fish were 400 million year old fossils!
﻿
﻿

The fish were entombed in Caithness Flagstones on East Market Street but thanks to a keen-eyed member of the public they've been located, lifted and stored here at Murchison House (Scottish HQ of BGS). 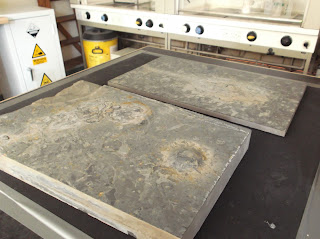 Other specimens have also been spotted in flags outside the Scottish Parliament and the Royal Commonwealth Swimming Pool.

These Devonian fish would have thrived in sub-equatorial lakes (at about the same latitude that South Africa occupies today). Some of our pavement specimens are up to 60cm in size. The operation to preserve and study these fossils highlights the exciting treasures that lie beneath our feet in the city of Edinburgh.

Tom is currently preparing the specimens for research and display..... there's the potential to uncover new species of fish and other hidden treasures in the flags. Watch this space for updates from Tom. If you want to see the fish come along to the open day where Tom will be showing them off and explaining the importance of 'rescue paleontology' in our modern world.