on July 04, 2012
Like it says in the blurb over on the right: this blog will be written by the staff at the British Geological Survey about the science we work on every day. That’s not to say we’ll be able to post everyday but  we’ll do our very best to keep it frequent, interesting and entertaining. I make no apologies for the over use of geology jokes and puns.... just look at the comments i got from our facebook fans when i asked for Blog-name suggestions!! Haha 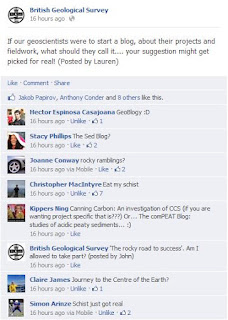 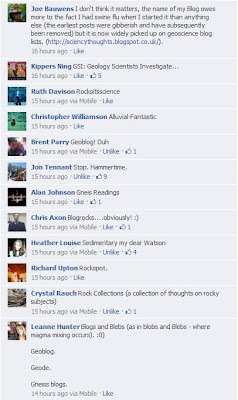 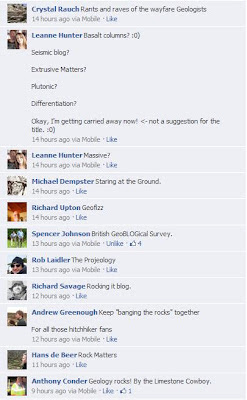 Leaving the hilarious puns for one second and taking a serious tone of voice..... behind all the science, the maps, the policies and the numbers are hard working, talented, passionate people. Everyone at the BGS has an important role to play and we know the work we do is important. We’re excited to have this space to talk about what we do, why we do it, how it affects everyone and what it means for the future.
Sometimes you’ll hear from people out in the field : Gemma Purser is off to Utah, USA tomorrow to continue work on a carbon capture and storage project with Cambridge Uni and Shell. Brighid O Dochartaigh is off to Iceland in August for a bit of groundwater drilling and monitoring. They're both armed with cameras and laptops so expect post from them soon.
Sometimes it’ll be from folk in their workshops, labs and offices : soon you’ll get an update from our G-BASE scientists who’ve just received another batch of samples from their colleagues doing fieldwork in Devon.
Sometimes you’ll hear from me and the others on the Communications team : over the course of the next few months i’m sure we’ll all introduce ourselves and explain how we juggle being scientists and Comms officers (aka geeky chatter-boxes). Our next big Comms task is the British Science Festival in September.  We’re hosting events about Ground Source Heat and Space Weather..... during the festival they’ll be daily ‘behind the scenes’ updates on here and a wealth of photos going on facebook too!!
So I hope you’ll come back here again and again to keep an eye on what we’re doing at the BGS. We’re passionate about our work and are proud to be a world-leading geoscience centre.

percetakan termurah said…
an issue that I am passionate about. I have looked for information of this caliber for the last several hours. Percetakan
5:52 am, April 15, 2013